Skip to Content
Home / Tales / About lightness and darkness

“John! John! Lucy is here! “
An excited Edith rushes into the room, where John tries to focus on a news message about the current ruler in the city, a rather self-centered authoritarian kind of person with a short fuse. It takes a while before he’s back in the present, and then another moment until he realizes who Edith is talking about. Lucy …. A good friend from the past, a few years older, and a reliable supportive citizen in the village where they come from. Someone who values and strives for honesty and truth, and therefore sometimes gets into conflict with this or that person. Suddenly John is curious about what brought Lucy to town; this is not really the kind of environment she would seek by herself.

A while later, Edith enters the room with a visibly tired and somewhat dusty familiar appearance. “Lucy! ” John says, genuinely happy to see her, “That was a long time ago! My God! What brings you all the way here? ” They hug each other warmly and then Edith leads Lucy to an empty chair. She wants to ask and say a thousand and one things, but restrains herself in order to give Lucy the chance to acclimatize. Lucy looks around, as if inspecting the surroundings, takes a deep breath, and then looks at them seriously. “Joseph is dead! ” she says blatantly, struggling to convey such a message.

The silence falls heavily over those present in the room. It is as if everyone holds their breath, as if time slows down a little and reality becomes very insightful in a short moment. Then, with her usual sobriety, Lucy continues: “It was to be expected once, of course. He was old, so old that nobody knew his age exactly. And he was increasingly bothered by all kinds of physical discomforts that come with time. I think it’s good this way. Now he was able to enjoy visits and festivities until the very end. ” John hears what she says, knows that she is right, yet his world is paused for a second, and his thoughts tumble back in time, to the moments he and Joseph were together, and shared thoughts and feelings. In the background he hears Lucy and Edith talking about the convoy of cars with which Lucy came to town, how fast it went because they drove day and night, how unpleasant some traveling companions were, and once in town, how difficult it was to find John and Edith. Via-via she succeeded, so now she’s here. “ Before I go back, I take the opportunity to buy some things for people from the village . But I thought you should know that Joseph… ” John stands up abruptly. For a moment, he wants to be alone with his thoughts and without saying a word he walks outside into the street. Edith stops Lucy, who wants to get up, and say something to John. “I guess you’ll be staying here for a few days. First, freshen up and rest. We’ll talk later, okay? ” Lucy nods in agreement, and follows Edith to a bedroom.

John stands on a bridge over a narrow canal and leans on the balustrade while letting his mind wander. He hardly notices the crowds around him. Nobody cares about him here. He thinks about the moment he and Edith stood in front of the bridge when they set off and left their village. Joseph had encouraged them to discover the world. By then, he must have realized that there was little chance they would meet again. Joseph had been such a stable appearance for John that he had not thought about this situation at all. What would it be like, saying goodbye and knowing it is final? We often do not realize that every farewell may well be the last. An accident, a robbery, or just simply passing away. Most likely it’s a good thing that we’re not always busy with that theme. That would only slow down our progress. But still… It gnaws a bit.
Joseph had been a gifted painter. John remembers the times they discussed Josephs works. In his own style he captured scenes, tranquil moments in which time slows down a little and a hidden message is revealed. Usually a moderately positive image, and rarely dark and cold. Yet the play of light and dark was in all his work, just like in his thinking and way of life. Prosperity and setbacks alternate, and both have their use, just like rain and sunshine. If things go well you should harvest, and if things go wrong, it is time to take some distance and rethink. How would Joseph have labeled their goodbyes? Or had he recognized duality in it and given it a place as such?

Driven by hunger, John returns home early in the evening. He smells the stew that Edith has prepared, and hears the soft voices of both women. They stop for a moment when he comes in, but he reassures them. “I just had to process the message, that’s all. Just let the memories come back, because I have experienced a lot with him. It’s okay now; I hope he didn’t suffer? ” He looks at Lucy questioningly, who shakes her head. “No, not at all. He was a bit limp for a few days and ate less, and one morning he didn’t wake up anymore. Went to sleep pretty peacefully, as it looks like. ” John is relieved, although he realizes that you never know what someone is hiding for you at such final stages. But all of that no longer matters. “It’s great that you came over to inform us. But it has been a huge task to cover that entire distance on your own! ” Lucy laughs. “Of course I wasn’t really alone in that convoy, and the trip was quite comfortable, apart from the bumps every now and then. The roads are not yet that good everywhere. But it indeed was a long journey. ” She shifts for a moment, and takes a flat package from the bag behind her. “Joseph wanted you to get this…” Curiously John unpacks the gift. He had recognized the shape of a painting immediately, but when he saw it his mind filled up. It was an image of his old home, the house, the forecourt, with in the background the trees and mountains that he loved so much. And in the foreground the bench, where he and Joseph so often enjoyed the sunset together. The warmth of that sunset shines over the scene like an orange-gold glow. Edith makes a surprised cry: “This absolutely reflects Joseph! ” John looks with astonishment at the light and the shadows, the tension and the peace. He recognizes the subject, but did not know that Joseph had ever recorded it. Lucy sees his facial expression, and says: “Joseph painted this a few weeks after you left. Everyone knew that this was his way to process the goodbye. I think he appreciated that nobody spoke about it. He was never so good at expressing feelings. When it was ready, he said that someday he would send it to you, but until his death the painting was in his room. That’s why I came to bring it. Joseph would have wanted that! “

The tears are in John and Edith’s eyes as they look at Lucy and thank her very much for the effort she has made. Words are unnecessary, and John notices that he is closing himself off. Lucy wants to say something more. She looks apologetic, as if she hopes she won’t be blamed. “You must know, John, that Joseph missed you. He really loved to be with you both. He knew it was necessary for you to go out. But still … it took hold of him. I didn’t see it myself, but your neighbors said that after you left, Joseph walked around the square for hours. From the bank where you used to sit so often to the bridge, and back again. Sometimes he stopped and looked into the distance to see if he could still see you. He didn’t want to talk to anyone then. Only the next day did he continue as if nothing had happened. A few days later he started working on this painting. ” John feels a burden now, and that shows on his face. Lucy hurries to say that afterwards Joseph participated in village life again, that there was no sign of sorrow anymore. That saying goodbye is simply a process and that it is part of life. That Joseph played and laughed again outside with the little children. And that, considering his age, more often in his life Joseph had seen people come and go. Then, in a flash, John remembers the motto that Joseph once told him:

Life is like a painting:
a play of lightness and darkness. 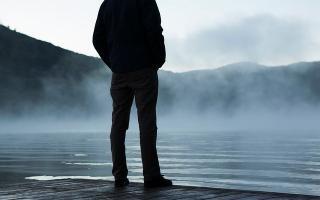