#Organismics can be regarded as the next step in the chain cell – organ – organism – ??? . But where an organism consists of several organs, and an organ is built from multiple cells, #Organismics is more like a phenomenon: the increase of autonomic intelligence outside the organisms. In other words: it is not enough to combine multiple organisms into an even more complex structure (although that certainly contributes to the establishment of #Organismics). Something new arises on a non-physical level, an autonomy that, as a sort of divine power, controls the actions of all people in its reach. It is a quality of a large collection of individuals that only becomes noticeable after exponential scaling up, and then appears to be hardly manageable. 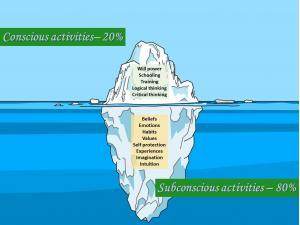 For example, it is not a conspiracy of a few powerful people, or the work of a lobby club. That kind of influence is still human work at the level of “organs”. Multinationals and partnerships are more like organisms, like countries and the unions of which they are part. In themselves, they act reasonably independently, based on a human leadership hierarchy. #Organismics is only apparent when you start thinking about the reasons why certain decisions are taken and implemented. Is that entirely objective and determined from your own insights? Or are there forces in play, comparable to the standards and values ​​from the iceberg model, but applied to structures that exceed us by far?

It is known that people behave differently in groups than as individuals. As individuals we have our standards and values, and behave accordingly. However, as soon as we are part of a larger community, we lose something of our own identity, and comply to other rules and practices. With clear teams you can often still recognize the leader’s mark. If, however, the group becomes exponentially larger, the characteristics of individuals disappear altogether, even though everyone within such a group still believes that they are authentic. Such a group has its own purpose, a function, and everyone acts accordingly. Just as people depend on each other, these kinds of collections also are. It is a matter of time, and then even larger collaborations of varying intensity arise. At a given moment, nobody knows exactly how everything works, and why things are done. People make general job descriptions for others, often not yet present, and established processes go like a law book leading a life of their own. In that development no sharp boundary can be drawn when #Organismics begins. That depends, among other things, on the strength, independence and indulgence of people at different positions. It is a sign on the wall if you do not derive your actions from guidelines issued not by people, but by authorities, Everyone acts on behalf of, or according to the spirit of, and so on.

#Organismics is like a self-regulating organism, in which we are all only insignificant elements. We are then something like ants in an anthill in a large forest, or the cells in your body. With humans, the effect is even stronger, because we use technology to fill the natural gaps between people so that a kind of distributed super-brain is created that will eventually span the whole world. The characteristic of #Organismics is therefore a kind of collective conscience, that lets everyone do things that are not so obvious (if you dare to think about it), and that you yourself could not come up with. Signals of this are noticeable in organizations and institutions where bureaucracy has too great an influence: as an individual you are sent from the box to the wall, and nobody can (or dares) adjust anything to the automated process that needs to be met. Another example concerns waging war: everyone you ask does not want war. And yet, crowds go to battle, fed by slogans and not complete information, based on emotions and fears. Only later, when the reflection comes, we say “Never again! “, and next we ignore the traumas that veterans have gained because at such a time there is no justification for the suffering. And yet … we continue to make huge efforts to keep our defense on strength, we train games that we hope will never become reality. There will be a reason for this on a global scale. And that is the ultimate example of an unaffectable #Organismics.

#Organismics is inevitable in the evolution of man. For me the question is very simple:

How can we positively and constructively embrace #Organismics?