John looks thoughtfully at the bridge in front of him.
It had long been clear to him that a change was coming. But when the moment came, it still was a bit of a surprise. Not that there was even a moment’s doubt. What ripens long is quickly picked. All too often he caught himself on automatically being busy with his work and the thoughtless coming home, eating, sleeping, and getting up early again. More than once he wondered why everyone was so serious about their own tasks and contributions. Sometimes he imagined what a bird sees when it flies higher and higher. How all the little details that everyone is so concerned about are slowly merging into a bubbling knit of activity, to finally silently fade into a barely recognizable anthill. Those were the moments when everything seemed useless. The only ones who benefited from all that stuff were the Lords, who owned everything and only wanted to see their own wealth grow. The workers, they just had to be kept quiet with some events, and get enough wages in order not to be hungry.

Nevertheless, John did not see himself as someone with a great sense of responsibility for the community. Why all of this slowly irritated him? Maybe because Edith, his wife, had predicted that a long time ago. Because she repeatedly encouraged him to undertake something new, something exciting. Her enthusiasm is very contagious on everyone, and not just on him! Edith had the gift to get people moving, talk encouraging, and to give support and appreciation even with the smallest successes. It had been his decision, a few months ago, to leave and live somewhere else. But without Edith’s enthusiasm that could have taken a bit longer.

John looks once more at the bridge, suddenly realizing: “That is the border we are now symbolically crossing! Behind it everything is new! ”
It is not a large bridge, like the one across the narrowing in the Fishermen Bay. The wooden frame seems to span the ditch more for ornamental purposes than that it is really necessary. And no matter how small, with all those slippery wet leaves you have to be careful. They can not afford a slip now, with the long journey ahead. This is probably also part of the symbolism … No change is risk-free. But to achieve something, you also have to take action.

While Edith puts her arm casually through his, and looks at him thoughtfully as if feeling his thoughts, John definitely takes the next step. 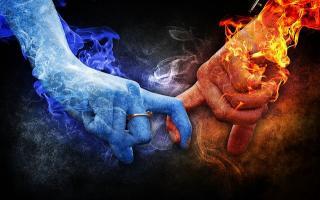